Disadvantages: The whole system is out of control if the central PU breaks down. In effect, you can’t shut down the plant in a safe way. Unless the plant is simple and small, the wires to sensors and activators are long and hard to install. 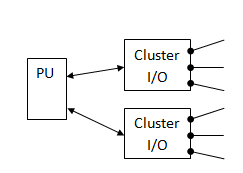 A system with first level of distribution has distributed I/O’s and one central PU polling data. You copy the I/O status to or from I/O’s via fast bus systems.

Disadvantages: The whole system is out of control if the central PU breaks down or the bus connection is lost. To clarify, you can’t shut down the different parts of the plant in a safe way. 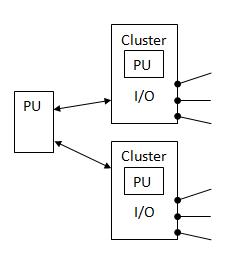 The PU in each cluster connects to a central PU. The PU’s in the clusters poll data and hold a copy of the status of each I/O.

The local PU can hold a program to make a safe shut down in the event of a failure on the central PU or bus connection.

Disadvantages: Each cluster still depends on the PU and bus connection to the different I/O modules. In other words, you can’t shut down local parts of the plant in a safe way. 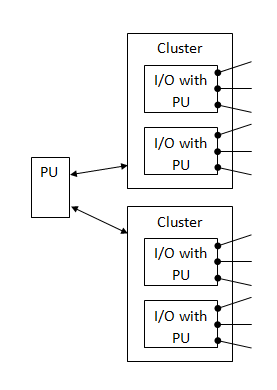 Each I/O module in the cluster has PU’s. Each PU performs a control function including I/O access. A central PU may send commands to the local PU’s, which sends status reports back to the central PU.

Advantages:
Each control function can shut down. The need for a redundant system is much lower, as the damage of an error is limited.

A plant built on the third level limits the effect of a hardware error to a small area, so the rest of the plant can keep working. “A broken finger does not prevent the other hand from calling the doctor.”

During service and when you make changes, a level three implementation makes it possible to perform a selective shutdown. It also reduces the need for redundant control equipment.

However, the implementation of the third level is often time-consuming unless you use an integrated development environment specialized to level three, like VIGO6.